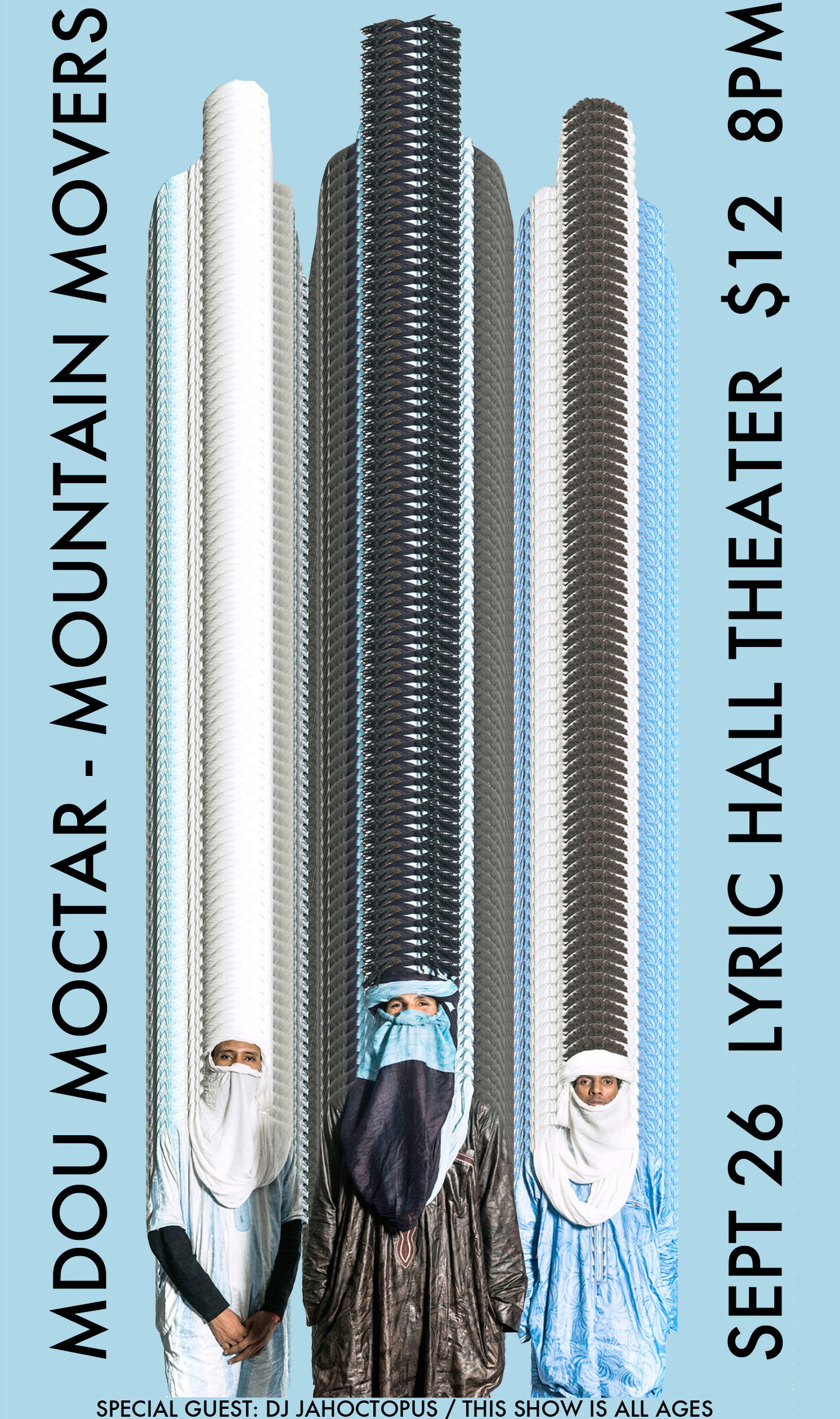 Mdou Moctar:
All the way from Niger, and for the first time in Connecticut, we are proud to bring you Mdou Moctar, shining star of the Sahel Sounds record label. We’ve been keeping this a secret for too long, and now we can announce this great show!

In the somewhat crowded scene of Tuareg guitarists, Mdou stands apart from his peers. One of the few original singer/songwriters willing to experiment and push the boundaries of the genre, his unconventional styles have won him accolades both in Niger and abroad.

Mdou Moctar hails from Abalak, in the Azawagh desert of Niger. He taught himself the guitar at a young age on a homemade instrument. Inspired by returning Ishumar, Mdou traveled the road to Libya where he traveled and worked odd jobs. As chance had, he would meet some of the now famous guitarists and further his musical studies. He returned home with a guitar and a dream.

Rising to the status as local celebrity, in 2008 he traveled to Nigeria to record his first album “Anar” – a psychedelic electronic album of Tuareg guitar, became an instant success throughout the mp3 networks of West Africa. “Tahoultine,” one of the standout tracks, was later featured on the compilation “Music from Saharan Cellphones.”

In 2013, he released his first international album, “Afelan,” rocking and raw sessions recorded live at his hometown in Niger. This was followed by the 2014 vinyl release of “Anar.” In 2015, he starred in the first ever Tuareg language film, a fictional story of the struggle of a guitarist trying to make it against all odds in Agadez. The film continues to be screened at festivals around the world.

Beautiful clip of an intimate session

Trailer for the cinematic homage to Purple Rain from the Sahel, titled “Akounak” (or “Rain the Color Blue with a Little Red”), starring Mdou and company

Teaser for the new LP, coming in August

Oldie but goodie, dripping in auto-tune

Mountain Movers:
Mountain Movers are from New Haven, and we have recently released our 6th LP, our first on the esteemed Trouble In Mind records in Chicago. We just completed a successful summer tour. Our new LP sold out of its first pressing, and our new video is getting some attention.

Watching the Mountain Movers’ progression over the course of the past decade has truly been a treat. Their earliest beginnings saw the band documenting Dan Greene’s vast catalog of songs, while displaying a rotating cast of New Haven musicians’ unique skills. The band produced three albums and several singles of polished indie rock in this incarnation. However, their fourth album, 2010’s Apple Mountain, saw the band transition to stranger territory; home-recorded and employing an arsenal of miscellaneous instruments, the record bore a folk-psychedelic element not displayed on their previous work. Shortly after Apple Mountain, constant members Greene and Rick Omonte were joined by lead guitarist Kryssi Battalene and drummer Ross Menze to form, what is now, the band’s longest running lineup. The band has since produced a series of singles, lathe-cuts, cassettes, 2015’s Death Magic; an album that melded Greene’s song writing with the bands ability to stretch out and improvise. In 2016, they previewed the “Sunday Drive / No Plans” cassingle (recorded at former drummer John Miller’s home studio), giving us – the listener – the first glimpse into the Movers’ newest modes. Two instrumental improvisations clocking in at just under 20 minutes that bring to mind names like Neu! and Ash Ra Tempel, as much as they do any number of American psychedelic acts of the 1960’s. The band’s sixth, eponymous album “Mountain Movers” is bookended by two long-form jams with three perfect, crystalline pop songs sandwiched in between, mirroring both aspects of the band & representing the most fully realized recorded representation of the band’s live show to date. Expect it to surface in May, 2017 on Chicago’s Trouble In Mind Records.