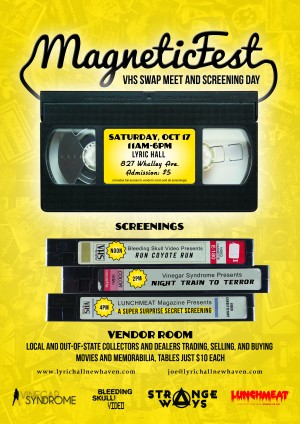 For ONE DAY ONLY, New Haven-area VHS enthusiasts come together to collect, swap, buy, sell, celebrate, and watch the best of the worst and the worst of the best on VHS!

Admission only $5!
Includes access to the vendor’s room and all three theater screenings.

VENDOR’S ROOM
Vendor’s room is open from 11AM to 6PM. Come trade and buy your favorite VHS tapes, posters, and more. If you want to sell tapes, a table in the vendor’s room costs just $10. To reserve a table, email joe@lyrichallnewhaven.com

NOON – RUN COYOTE RUN (1987)
Bleeding Skull Video presents their newest “patchwork brain-crusher,” RUN COYOTE RUN at Noon. The film is the legendary lost project from exploitation juggernauts Renee Harmon (LADY STREET FIGHTER) and James Bryan (DON’T GO IN THE WOODS). Recently discovered in the trunk of a used car, RUN COYOTE RUN was completed in 1987 by director James Bryan, but never officially released. The Bleeding Skull / Mondo Video release of this legendary “lost” shocker marks the first time the movie has been available on home video in any format. Just remember to bring a taste for the unreal to this one.

2PM – NIGHT TRAIN TO TERROR (1985)
Vinegar Syndrome‘s NIGHT TRAIN TO TERROR chugs along at 2PM.  In this 1985 shocker, aboard a fast-moving train bound for Hell, God and Satan decide the fates of three unfortunate mortals. In HARRY, a fiendish killer keeps the horribly mutilated body parts of his countless victims in a diabolical tourture chamber. In GRETTA, a young woman, obsessed with death, takes part in an unspeakable ritual of Russian roulette. Finally in CLAIRE, a young woman and a Holocaust survivor are terrorized by the son of Satan!Vinegar Syndrome brings the movie to home video for the very first time in its original aspect ratio.

4PM – LUNCHMEAT MAGAZINE PRESENTS A SUPER SECRET SURPRISE SCREENING (1983)
From cult director Gary Cohen (VIDEO VIOLENCE, CAPTIVES) comes a never-before-released, made-for-cable, shot-on-video feature that you will have to VHSee to believe! Originally created and aired for Suburban Cablevision in 1983, this made-for-TV feature is taken directly from the VHS source, keeping all of the inherent analog aesthetics intact! This low-budget and laugh-out-loud take on the classic Frankenstein story is one that you won’t forget, Tapeheads! A celebratory screening for the re-animation and Limited Edition VHS only from LUNCHMEAT!

More details are in the works for this fantastic, fun day when we bring the home video revolution back around again.

We hope to see you at Lyric Hall on Saturday, October 17.