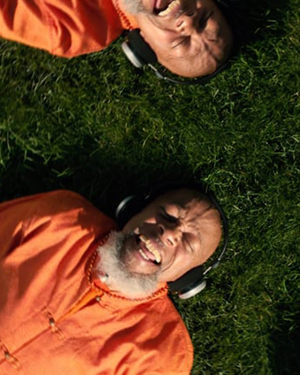 Shaki Presents/JMS Gems are so excited to announce this spectacular show. Please join us for a night of channeling Celestial Ambient Soundscapes…

We are humbled to present this concert, a unique performance by the one and only LARAAJI.

Laraaji is an American multi-instrumentalist specializing in piano, zither and mbira.

Born in Philadelphia, he studied violin, piano, trombone and voice in his early years in New Jersey. He attended Howard University on a scholarship to study composition and piano. After studying at Howard, he spent time in New York City pursuing a career as a stand-up comedian and actor.

In the early 1970s, he began to study Eastern mysticism and believed he’d found a new path for his music and his life. It was also at this time he bought his first zither from a local pawn shop. Converting it to an electronic instrument, he began to experiment using the instrument like a piano. By 1978, he developed enough skill to begin busking in the parks and on the sidewalks of New York.

The following year he was “discovered” by Brian Eno while playing in Washington Square Park. The result was his most widely-recognized release, Ambient 3: Day of Radiance, the third installment of Brian Eno’s Ambient series. This was his first album released under the name of Laraaji.

This international exposure led to requests for longer versions of his compositions which he supplied to meditation groups on cassette tapes. It also resulted in an expansion of his mystic studies with such gurus as Swami Satchidananda and Shri Brahmananda Sarasvati, founder of the Ananda Ashram in Monroe, New York.

Laraaji’s also started the Laughter Meditation Workshops which he still presents around the globe.

Recently, Laraaji’s earlier LPs were reissued, making his special music available to the public again. He has also recently collaborated with contemporary artists, like Sun Araw.

With so much to say, and so much being said about LARAAJI, it might be best to let you decide.

Please check the links below.

“Rob Noyes has been on the Eastern Massachusetts scene for a while… recently, Rob has taken to displaying his solo acoustic guitar chops and they are massive. The Feudal Spirit is the first vinyl evidence of their ‘shoulders.’ Like Western Mass’s Tony Pasquarosa, who mines the same widely-variant style-pits, Rob’s approach to acoustic playing resembles his electric work only through shared-belief-in-a-strong-downstroke. On the way to developing his own compositional/performance approach, Noyes sometimes seems to have absorbed an almost infinite reservoir of influences. Apart from some superb Basho-like 12-string tunneling, most momentary fragments tend to recall legendary Limeys like John Renbourn (and through him, Davey Graham), because Rob’s overt melodic structures tend towards the non-bluesoid. But then you’ll maybe hear a note-sequence spiced like something dropped from the hot strings of Michael Chapman or even a powerful throng that makes you think of Wizz Jones. When that happens, you realize there’s more of a blues base to some of the songs than you’d been able to untangle. Mr. Noyes hits a vast array of sub-genres on this album, and he hits them all… Rob’s playing carries the weight of many possibly-imaginary forebears, but the way he smears them all together shows a holistic mastery of touch and imagination that defies a lot of today’s players, who tend to shine in short bursts, then allow their dreams to outrun their technique. Rob Noyes has no such apparent limitations. Like Raymond Pettibon, whose artwork graces The Feudal Spirit’s cover, Rob’s able to create a true form-gobble, making some real beautiful noise in the process…”

Chris Donofrio spent much time in Reviver and Arabian Blade, both outfits that identified him as a conjurer of heavy crushing vibes. Interlaken finds him in a HEADY space. A patience has overcome the crushing vibes, and we are left with layers of layers of layers of sound. Explorations of space and time have replaced the ominous. The listener is afforded a view of the stars; Discovery lies ahead.

DJ Justin JMS Gems is everyone’s fave zzzoner at WPKN. He’ll be bringing the mood, before, between, and after the artists perform.