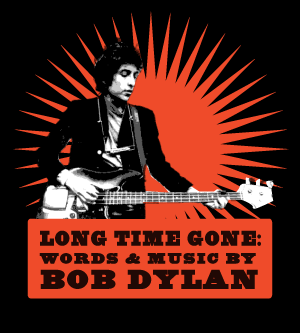 Long Time Gone,   a theatrical biography, tells the story of one of the most intriguing and influential figures ever, entirely through his words and music. At intimate and historic Lyric Hall, blues master Guy Davis and acclaimed singer-songwriter, BettySoo will perform the songs in personal interpretations.  Between the songs, Peter Landecker as Dylan speaks to the audience & re-creates interviews, one in each act.

The story is of a kid who leaves home in Minnesota at 18 and is worldwide star by the age of 21, whose songs define the times during enormous social change.  No sooner, he upturns all the norms of popular music giving us incandescent poetry in song.  His fresh take on everything is ahead of his time.  Act One ends with “Like a Rolling Stone”.

Act Two reveals Dylan wanting no part of being spokesman of a generation, he speaks of family life and influences.  The songs are country & reflect a man in love. A dream sequence becomes “All Along the Watchtower”.  The heartbreak songs lead to redemption & the act two interview delves into spirituality but he says it’s the songs nourish him.  “Forever Young” leads to a verse from the title song performed in act one.  He’s singing to his Ma,  “I’m a long time comin’ and I’ll be a long time gone.”

“Peter Landecker was unbelievably uncanny, he had that Dylan way about him where you didn’t entirely know  what direction he was going to go in with his voice  but it always turned out to be the right direction.”      (Burlington Free Press, VT)

Guy Davis is one of the best bluesman in circulation. Writing of him and his music, the New York Times used words like “talent, charisma and authority” and Living Blues has talked of “impeccable craftsmanship“ and “lyrical vision.”  The magazine Mojo said that “today nobody knows how to mix the thousand aspects of Afro-American music such as Guy Davis.”

“BettySoo’s voice is the perfect combination of strength, vulnerability and clarity.  It is just perfect.“  (Americana-UK)

BettySoo is from Austin, Texas.  www.bettysoo.com